The African territories’ attachment to the European colonial powers varied, from the Congo Free State, which was King Leopold’s private property, to British protectorates, still nominally independent and ruled by local leaders, but under British supremacy. The colonial powers established an administration in the colonies, which ruled in the overseas territories on behalf of the home country authorities.

Both France and the United Kingdom ruled several of their colonies under joint administration and through local leaders and traditional structures. The colonial powers gladly portrayed their task as “civilizing” the people they subjugated. The reality was, first and foremost, that the colonies were part of a rivalry between the great powers, and a battle for position and power. This power struggle continued from the great voyages of discovery, which established new and valuable trade routes. For European powers, control over colonies was access to raw materials, and access to markets for the export of finished goods from the emerging industry.

Colonialism was an imperialist policy, with two main elements: to create empires through the conquest of territories, and to create values ​​through controlled trade. The foremost task for the colonial authorities was therefore to facilitate the conditions for increased export production in the colonies. This was done by ensuring stability, if necessary “pacifying” the native population and investing particularly in modern transport networks. The purpose of developing roads and railways was to facilitate the export of raw materials extracted from Africa, and they were typically built from inland forests and mines to ports on the coast for export.

Private European investment in sub-Saharan Africa during the colonial period was not large on a global scale. As much as two-thirds of the investment was related to mining operations in Congo, Rhodesia and South Africa. Besides minerals, exports consisted mainly of tropical agricultural and forestry products. European immigration was encouraged, but settlement in the colonies was limited except in a few colonies, especially Algeria, Angola, Mozambique, South Africa and Rhodesia. In the settler colonies, the Europeans occupied the best territories with arms power and administrative new regimes, and it is not without reason that it was especially in these colonies that there was an armed struggle for independence, and that the right to land was a major issue in the liberation struggle.

With the exception of some plantation operations, it was mainly African small farmers who produced tropical export goods such as cocoa, coffee, tea and tobacco. The plantation operation as well as the extraction of mineral resources were labor intensive and required access to affordable labor. Recruiting local African labor in a society most characterized by natural households was problematic, and the colonial authorities had to resort to administrative regulations, especially taxation of houses and cattle, to secure the necessary labor. 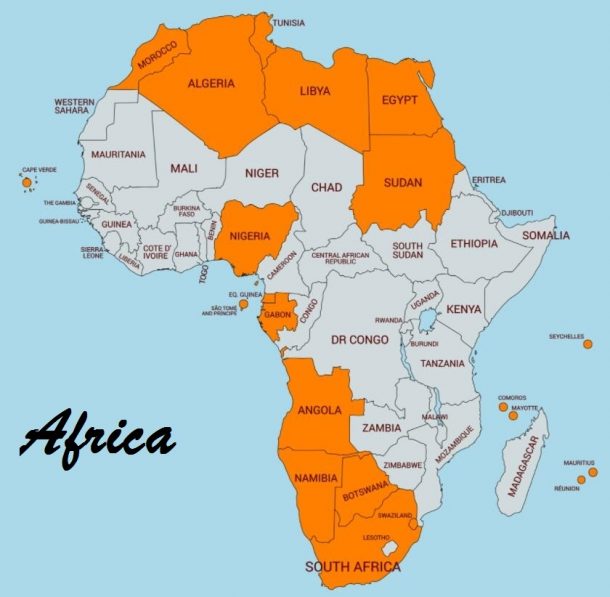 In some of the colonies, especially in French and Portuguese Africa, forced labor was widespread; especially rubber production in the later Belgian Congo was notorious. The development of the South African economy’s driving force, mining, was based on a system of migrant workers recruited from across the region to work a certain number of years at the mines, leaving the family at home and having to live at the mines. A large number of Indians were also brought to South Africa, Kenya and some other countries, mainly for the development of the railway, but also for agricultural work. Check Countryaah for all countries in Africa speaking Portuguese and French.

For several reasons, the colonial authorities, as well as religious and philanthropic interests, also promoted civilian development in the African territories. On the one hand it was desirable with local expertise to develop various sectors of society, and on the other hand it was considered a moral obligation. The difference between the colonial powers’ relationship to such issues was considerable, with France and the United Kingdom going the furthest to build a civilian infrastructure and educate local elites and promote middle classes in their possessions.

Belgium was at the opposite end in Congo, where a higher education supply for Africans was hardly established. Nor did Portugal invest much in promoting the development and prosperity of Africans. In contrast, in many colonies, associations with economic and social purposes were established, especially in the cities – the seed of the coming nationalist movement that led the struggle for independence.

The demand for self-government was expressed at the earliest in the ecclesiastical field, where African Free Churches broke out from the European dominated mission churches, in British West Africa as early as the 1880s-1890s. A more radical form of religious protest was expressed in prophet movements that proclaimed an Africanized form of Christianity and often had clear visions of political change.

Pure political organizations were at the earliest in southern Africa and British West Africa. The African National Congress (ANC) was established in South Africa in 1912. The following year, the South African Union adopted the “Native Land Act” – a land reform that deprived the African people of most of its traditional areas.

In West Africa, after World War I, the Legislative Councils had a certain element of elected African representatives. In rural areas, farmers rose in many places to protest economic exploitation. Strike actions among wage workers often had direct sting against the colonial authorities. African newspapers, which in the most important coastal cities in West Africa date back to the 1870s-1880s, also did much to create political consciousness. The participation of African soldiers in European armies during the First World War also contributed to increased awareness and awareness of equality.