Architecture. – The strategic position within the NAFTA countries (North American Free Trade Agreement) and the renewed entrepreneurial climate, thanks to numerous incentives in support of manufacturing industries and above all of development and technological innovation, make Canada an extremely dynamic reality. The non-residential construction and civil engineering sector is experiencing significant expansion: the infrastructure market is expected to reach a value of 91 billion euros by 2015. The Canadian federal government has in fact introduced new stimuli to infrastructures and, in recent reports, the energy sector emerges as the first recipient of investment flows; they follow the projects in the transport, health and traffic sectors.

The CIBCWM metropolitan economic activity index, created to assess the macroeconomic performance of major Canadian cities, published by CIBC World Markets, provides an annual assessment for each metropolitan area in Canada. According to the latest available data, Toronto was confirmed in first place (it was in the top five cities of the Canada for seven consecutive years, except during the recession of 2009, when it ranked seventh). Construction has played an important role, supported by large activity in both the residential and non-residential segments; the number of new homes grew by 30% on an annual basis; the population has grown at a rate of 2% per annum, while the increase in employment has recorded its highest levels during the last decade. By extension, as well as culturally and economically, Toronto has developed rapidly. On the architectural level, in the last decade the city has undergone important transformations with the creation of a series of highly iconic buildings that are substantially changing its image. By way of example, we recall: the Aga Khan Museum, entirely dedicated to Islamic art, the work of Fumihiko Maki opened to the public in 2014, which is located inside the park designed by Vladimir Djurovic not far from the Ismaili Center (2014) designed by the master of Indian architecture Charles Correa; the needle (Art Gallery of Ontario) by Frank Gehry, inaugurated in 2008; the spectacular extension of the ROM (Royal Ontario Museum) by Daniel Libeskind, inaugurated in 2007; the expansion of Will Alsop’s OCAD (Ontario College of Art and Design), completed in 2004. Diamond Schmitt Architects was also very active: in 2013 the Peter Gilgan Center was inaugurated, while the previous year it was Ryerson Image Center opened; the transformation of the Globe and Mail Center into a multifunctional center is expected in 2016.

Second by population, Montreal is the largest city in the French-speaking province of Québec. Among the many recent projects that have been carried out there, we remember: the Vitrine culturelle (2013) by the Moment Factory studio, a cultural information center located at the intersection of rue Sainte Catherine and boulevard Saint-Laurent, characterized by a conspicuous multimedia facade; the new pavilion of the Montreal Museum of fine arts by Provencher Roy + Associés, inaugurated in 2011. In the same year, the Théâtre La licorne, the Stewart Museum were completed and the well-known service station of Ludwig Mies van der Rohe was converted by the Les architectes FABG studio.

Third city in the North American state, the federal capital Ottawa also boasts a renewed architectural image resulting from a series of successful recent projects: the new Ritchard Brisbin Convention Center (2011) with BBB Architects Ottawa Inc.; the headquarters of the University of Ottawa (2012), the work of KWC Architects + Diamond Schmitt Architects; the headquarters of the Delegation of the Ismaili Imamat of the Aga Khan Foundation (2008), a project by Fumihiko Maki with Moriyama & Teshima.

Finally, the largest municipality in the whole of Canada and one of the most dynamic cities, attentive to sustainability and attractive on the entire North American scene, is Vancouver. Numerous recent quality projects include: the renovation of the York Theater (2013) by Henriquez Partners Architects; the Earth Sciences Building (2012), by Perkins + Will; the Center for digital media (2012) by Musson Cattell Mackey Partnership Architects; the Faculty of Pharmaceutical Sciences of UBC (University of British Columbia, 2012) designed by the Saucier + Perrotte architectes & HCMA studio; the research center dedicated to Robert HN Ho (2011) of CEI Architecture + MCMP Architects; the Vancouver Community Library (2011), an interesting work by the Miller Hull Partnership studio.

Literature in French. – Literature plays an important role in today’s complex Canadian society. In fact, Canada is a country that consumes a lot of literature and the panorama of authors is extremely lively. The research centers of its universities, in particular that of Montréal with the very active Observatoire de Immaginaire contemporain, are among the most dynamic in the world precisely for literary research. The system of salons and literary awards is extremely complex. If the two official languages ​​of Canada are French and English, English-speaking Canadian literature is “on the outskirts of a periphery” (Coyault, in Cartographie du roman, 2010, p. 12) also because, also due to its geographical proximity, it undergoes the influence and supremacy of American English-speaking literature. On the contrary, Québécois literature of the French language is highly autonomous, in style and themes, with respect to European models but, perhaps precisely for this reason, little known internationally.

The place and fundamental tool of identity research in a country that is the destination of important migratory flows is certainly the novel which has progressively become, as in the rest of the world, the largely dominant literary genre. Within the stylistic modality of postmodernism, rich in contamination and intertextuality, the Québec fictional imaginary follows two main lines: on the one hand, an exoticism, a tension towards the elsewhere and, on the other, on the contrary, a a sort of regionalism centered on the representation of the spirit of places. Among the most significant authors must certainly be remembered: Michel Tremblay (b. 1942), playwright and author of numerous novels in which he portrays the conditions of the working classes; Yves Beauchemin (b. 1941), successful author of ‘urban’ novels set in Montreal; Les lettres de Martha. Judy Quinn (b.1974) belongs to the generation of the seventies, who with her novel Hunter s’est laissé couler won the prestigious Robert-Cliche prize in 2012, while Danielle Trussart (b.1948) published the his first novel, an award-winning best seller entitled Le train pour Samarcanda. 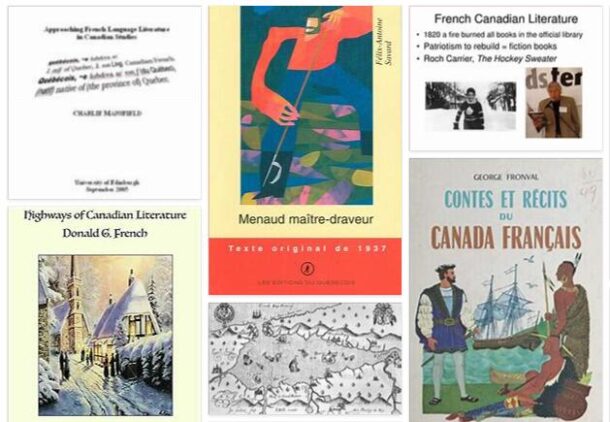