According to the constitution of 1949 was Hungary a communist people’s republic. Following a comprehensive revision of the Constitution in 1989, most recently amended in 1997, Hungary is now a parliamentary-democratic unitary state. According to AllCityCodes.com, the head of state, the president, is elected by the National Assembly for five years and can be re-elected once. He is formally military commander, but otherwise has very limited authority. The actual executive lies with a parliamentary responsible prime minister and government. The government, the Supreme Court Justice and the Attorney General are elected by the National Assembly (Országgyülés). It has 386 seats and is elected in the general election for four years. The elections take place both as majority elections in single-person circles (in two rounds if a candidate does not get an absolute majority in the first round) and as proportional elections (with the whole country as constituency). The two leading parties.

Administratively, Hungary is divided into 19 counties (megyech), in cities and smaller municipalities. Also see AbbreviationFinder for abbreviation of HU and its meanings of Hungary. The capital Budapest has a special status and is divided into districts. There are elected bodies at county and local level and limited local self-government. State representatives supervise the local authorities.

After 1989, a constitutional court was introduced, with the right to test the constitutional compatibility of laws, and an ombudsman scheme was established. The Supreme General Court is the Supreme Court, headed by a Justice elected by the National Assembly. At the next level there are county courts and a court in the capital. At the lowest level there are local courts. Also the Attorney General, who among other things has citizens’ rights as the area of ​​responsibility, elected by the National Assembly.

Legislation for Hungarian minorities and Hungarians in other countries

At the beginning of the new century, Hungary, under the auspices of the EU, launched an action plan against the country’s 700,000 gypsies, to counteract discrimination in employment and in society otherwise.

Furthermore, a “Law on Hungarians living in neighboring countries” has been adopted, the so-called status law, which includes the territories Hungary lost at the peace settlement in Versailles in 1920, including Romania, Slovakia, Ukraine and the former Yugoslavia. The law aims to secure both financial support and assistance to preserve Hungarian identity for almost five million people.

A proposal to also offer Hungarian citizenship was put to the referendum, but this became invalid due to low turnout, and the case was therefore put on ice. An extension of the Status Act in 2003, with certain guarantees also in terms of work, health care and education, was disputed both in the National Assembly and in the neighboring countries, which claim that the law violates their sovereignty. However, the law amendment was promoted as part of the EU adaptation – and recalls that not only the Communist era, but also the First World War is the backdrop for the transition process Hungary is still in.

In 2006, Hungary operated with a budget deficit that exceeded 9 percent of the gross domestic product, three times the EU requirement. With membership in the currency union and euro cooperation for the eyes, taxes, fees and deductibles were increased, while health care, students and pensioners received noticeable cuts, with increasing social unrest. However, the savings measures and reform packages got a blow to the bow when the opposition parties in March 2008 conducted a referendum – with a clear majority against the government’s savings packages. In the growing political turmoil, the Peace Democrats walked out of the coalition. A weakened socialist party thus ruled alone in a weakened government – as the international financial crisis hit and sharply strengthened the underlying problems in the country’s economy. A EUR 20 billion rescue package from the International Monetary Fund and the EU prevented technical bankruptcy.

In the spring of 2009, Hungary emerged as the hardest hit EU countries in Eastern Europe, with the currency in free fall, queues of small savers outside the bank branches and a queue also of investors and Western-owned companies on their way out of the country, while unemployment was on the rise 10 percent. Ferenc Gyurcsány announced his departure as prime minister and justified it with a general lack of support. He was replaced by Finance Minister Gordon Bajnai.

In 2010, the national conservative party Fidesz won the government with an absolute majority in parliament, and Viktor Orbán was elected prime minister. In 2012, János Áder became president, also he from the same party. 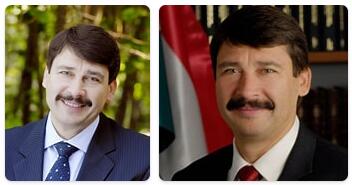