The Sanskrit term that refers to the concept of law is dharma, but it more properly designates, in a synthesis of religious and profane elements, the rights and duties of man in every field of his activity, the rules that direct the behavior of beings. more on the religious and moral level than on the social and juridical one. According to the indigenous tradition there are four sources of dharma: revelation (ś ruti), tradition (smṛti), the behavior of cultured and virtuous people (ś iṣṭācāra), the uses and customs of regions, castes, families (deśajātikuladharma). The dharma gave rise to a rich literature that from the end of the Vedic period (6th century BC approx.) extends up to the 15th century. XVIII. The most ancient sources of Indian law are the Dharmasūtra (aphorisms relating to the law), in prose, which contain, alongside the treatment of doctrinal and religious problems, the first sketches of a legal doctrine (definition of the duties of the four castes, rules of nature economic and social, elements of civil and criminal law). With the emergence of specialized legal schools, which tend to codify the legal matter in broad and detailed expositions, the actual legal treaties are born, the Dharmaśāstra (Legal Treaties), also called Smṛti, based on the ancient Dharmasūtra but with a more strictly juridical character: famous is the Manusmrti (Manu’s Code) which appeared between the sec. II a. C. and II d. C., devoted mainly to the presentation of issues of public law. Ancient and authoritative is also the juridical treatise of Yajnavalkya, of the century. III d. C. ca., which exposes the legal matter according to the classic tripartite division in social conduct (ā cāra), judicial procedure (vyavahāra), expiation of penalties (prāyaścitta). Very popular is also the Code of Narada of the century. IV d. C. ca., which circumscribes the dharma within the realm of law. These juridical sources, which form the basis of Indian jurisprudence, had, starting from the century. IX d. C., a considerable number of commentaries, written with critical and coordinating purposes: the most important is a commentary on the treatise of Yajnavalkya by Vijñaneśvara (second half of the 11th century ca.), fundamental text of the Mithilā school. Finally starting from the century. XI compendia of law appear, the Dharmanibandha, compiled by jurists and statesmen with a critical and systematic method. Elements of law are found throughout the literary production of India, particularly in political literature: for example, the Kauṭilya-Arthaśāstra (for some dating back to the 4th century BC and for others to the 3rd century AD), he devotes ample space to the judicial procedure, to the definition of the competences of officials and to systems of punishment. See toppharmacyschools for higher education in India.

The religious foundation always prevails in all. Here is a brief summary of the fundamental principles of Indian law: the prince, invested with majesty and divine nature, is the ruler of the kingdom, guardian of the law, absolute arbiter of justice; he must judge and punish, persecute evil, seek the truth by adhering to the norms codified in the treaties, consider himself responsible for an unpunished crime or an unjust sentence. The sovereign has the power to decide even when, with the improvement of the state body, he is supported, in the administration of justice, by competent officials. The theoretical value, moreover not excluded, the equality of each individual before the law is continually undermined by the caste prerogatives that emerge in every section of the Indian legal system. We already know of some privileges of the Brahmanic caste, which lasted in India up to the modern age, in the most ancient texts. The rules governing the procedural institutions are very precise. The probative forms are generally divided into human and divine: the first consist of documentary evidence and the oral test of witnesses, the second from the oath and the ordeals used in doubtful cases or in the absence of other evidence (some forms of ordeals have preserved until the modern and contemporary age). The penalties provided vary from a simple admonition to execution. One of the most feared convictions is the expulsion from the caste. The family institution is the subject of extensive juridical treatment: of a patriarchal type, the family is protected and regulated by rigorous rules that condition the daily life of its members, being considered the fundamental organization of society. Marriage, always theoretically forbidden by all texts between people of different castes, is generally considered a sacred and indissoluble bond. However, there are numerous practical infringements of the rules on caste, while exceptions to the indissolubility of marriage are contemplated by the same treaties. The rules governing the distribution of assets and the right of inheritance emphasize the precedence of legitimate children over adoptive ones. Despite the succession of foreign dominations that exercised power over the territories of India and which each brought with them their own customs and regulations, Indian law remained substantially based on ancient principles, above all due to the natural and still lively tendency of the Hindu mentality to preserve the original structures as they are consecrated by tradition. In fact, in the current Indian Republic, the legal system, despite the necessary adjustments and introduction of new institutions (generally on the basis of British legislation), has remained faithful to the main lines of the ancient system. 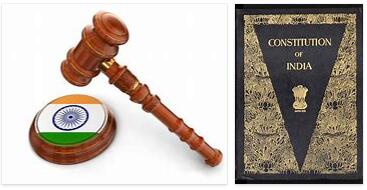