Kosovo is located in the center of Southeastern Europe, a region also known as the Balkans or Western Balkans. After the violent clashes of the Kosovo conflict in 1999 and the subsequent international administration by the United Nations, Kosovo celebrated its independence in 2008, which is still not fully recognized internationally. This makes the country the youngest country in Europe.

History and politics are due to the mutual relationship to the Serbian nation, which had its cradle in Kosovo, and Serbia, to which Kosovo in the 19th and 20th centuries. Century, and shaped the today’s Albanian majority population. The state independence of 2008 remains a point of contention with Serbia and is the subject of a political dialogue led by the EU.

In a European comparison, the economic situation of Kosovo is characterized by underdevelopment, which manifests itself among other things in a large trade deficit, the dependence of the economy on cash benefits from the diaspora or the high unemployment rate. However, with a very young, western-oriented population and large mineral resources, Kosovo has significant development potential.

According to CHEEROUTDOOR, Kosovo is a safe country if some security rules are followed. The greatest danger comes from the sometimes chaotic road traffic. The nature, the warmth of its people, the youthful dynamism of the big cities and the diverse cuisine are “sights” that make Kosovo a special travel destination.

On February 17, 2008, with the country’s independence, a national flag was also confirmed by parliament. Based on the flags of the European Union and Bosnia-Herzegovina, the flag shows of Kosovo the outlines of the country in gold or bright yellow and six white stars on a blue background. The stars symbolize the most important ethnic groups living in Kosovo: Albanians, Serbs, Roma (including Ashkali and Egyptians), Turks, Bosniaks and Gorani. The blue background stands for the close ties between Kosovo and the Euro-Atlantic structures. The majority of the Kosovar Serbs reject the new flag. The Albanian flag is widespread among Kosovar Albanians and the Serbian flag among Kosovar Serbs. The Kosovar flag was designed by Muhamer Ibrahimi.

The coat of arms is based closely on the flag of Kosovo and also shows the outlines of the country and six white stars on a blue background. The color of the edge, as well as the outline of the land, are officially gold with a brownish tinge, although in practice a bright yellow has spread.

Europa / Evropa, Kosovo’s national anthem, is further evidence of the country’s close ties to the European integration project. After the hymn of the European Union, Beethoven’s Ode to Joy, was played on official occasions, the Kosovar parliament passed the new hymn on June 11, 2008. A text was deliberately omitted in order to avoid a reference to an ethnic group. The hymn was written by the Kosovar Albanian composer Mendi Mengjiqi.

Approx. 6,000 non-governmental organizations (NGOs) are registered in Kosovo, of which only 10% are considered active. As in the other successor states of socialist Yugoslavia, civil society initiatives in the modern sense have a relatively short but important tradition; In Kosovo this goes back to the forms of self-organization of the Kosovar parallel society and during the 1990’s, in the context of the Kosovo war in 1999. With the end of the war, the return of the largely displaced population and in the context of reconstruction (the role of the Mother Teresa Society should be emphasized) civil and proto-state structures under UN supervision, there was an explosion of NGO start-ups driven by western donors in a very short time. The civil society scene is highly dynamic due to the high proportion of young people in society. The largest number of active NGOs are concentrated in the centers, while the number of active NGOs in rural areas is low. Since the end of the war, a number of local, independent civil society organizations have also developed in the predominantly Serbian communities in Kosovo – in northern Kosovo since the beginning of the Kosovo-Serbia political dialogue in 2013 – including a small number of more political NGOs.

In addition to more recent civil society organizations, there are still trade unions, which have around 60,000 members in Kosovo. With a degree of organization of around 90% coverage in the public sector, an important social partner, which, however, depicts the process of de-industrialization after the end of the socialist economy, and structurally forces the unions to become somewhat dependent on the ruling parties. There is also a Kosovar Economic and Social Council, but its resources are very limited and hardly any operational importance is attached to it.

The Kosovar Civil Society Foundation is a good point of contact for more information on individual NGOs in Kosovo or on the third sector as a whole.

The results of several analyzes – the CIVICUS country report Kosovo and the USAID report are recommended on civil society development in Eastern and Central Europe – show that despite a substantially positive development of civil society in Kosovo, it is not considered representative and its potential for impact has so far been limited. Less than 20% of Kosovars do voluntary work. One of the reasons given is that local NGOs are heavily dependent on foreign donors and therefore do not necessarily develop their own agenda that is geared towards the needs of the local population. The political system in combination with clientelism does not contribute positively to promoting a social space for social alternatives. State actors often fail to understand the role and potential of civil society actors or at least underestimate them. At this point, persuasion, support in the sense of sensitization, institution building, empowerment and ownership is urgently needed. The international community, which often sets the wrong accents and incentives with its funding instruments or with incorrectly set priorities, also plays an important role. There are a dozen or so well-known think tanks in Kosovo. The majority of NGOs, however, are apolitical or active in the social sphere. Structurally, these civil society organizations are confronted with the dilemma that they often take on tasks that are the responsibility of state institutions in a developed welfare state. Thus, on the one hand, they perform important social tasks, take away from the political class or

A specific proposal from the exploratory opinion of the European Economic and Social Committee on the role of civil society in EU-Kosovo relations is to strengthen long-term funding, facilitate access to regional programs for Kosovar civil society organizations and increase IPA funding Make the EU accessible to smaller NGOs as well. 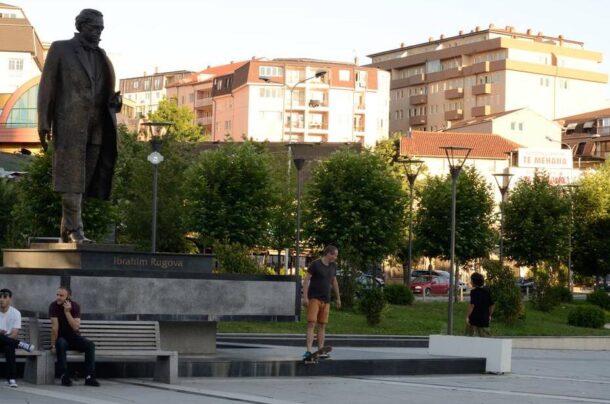 According to the Media Media Sustainability Index 2019 from IREX, 5 daily newspapers, 20 television and 82 radio stations operate in Kosovo. The newspaper with the highest circulation is Koha Ditore, followed by Kosova Sot. Other daily newspapers are Zeri, Bota Sot and Epoka e Re. The largest television stations are the public broadcaster Radio-Fernsehen Kosovo RTK, the broadcasters KTV and RTV 21, which belong to the Koha media group. Other stations with their own information program and political reporting are Klan Kosovo, TV7 and TV Dukagjini. Major radio stations areRadio Dukagjini, Radio Kosova and Radio 21. The dissemination of information via the Internet has recently increased significantly. An estimated 70% of all households have Internet access. Internet news portals such as B. Telegrafi, Gazeta Express or Kosova Press are seeing increasing readership. Approx. a quarter of all media offer multilingual information, some of them very comprehensive, especially the state media, such B. RTK.

According to the Media Act, 16% of the airtime is to be devoted to minority programs. Since 2013, the state television (RTK) has broadcast its programs only in Serbian on its second channel RTK2; there are also broadcasts on the first channel in the languages of the other large minorities in Kosovo. However, the media landscape among the Kosovo Serbs is dominated by Serbia’s media, above all the state television and radio station RTS, as well as the major daily and weekly newspapers. In Kosovo itself, however, there is a network of smaller radio and television stations that provide largely independent reporting. The news portal Kossev is an important independent source in Northern Kosovo.

On the 2019 press freedom index of the NGO Reporters Without Borders, Kosovo was ranked 78th in a list of 180 countries, an improvement of 22 (2) places compared to 2005 (2014). Despite this positive development, the NGO KIPRED is evaluating the media situation in Kosovo remains critical. Despite being enshrined in the constitution, freedom of expression continues to face challenges. Investigative journalists face threats and attacks. There is a culture of influencing the media by both private and political actors, which inevitably raises problems such as self-censorship and dependence. Regardless of these negative phenomena, the media landscape is one of the most pluralistic in the successor states of the former Yugoslavia.

For German-language news about Kosovo, the standard, which provides extensive Kosovo reporting, is particularly suitable. The German wave provides information, reports and analysis to Kosovo as part of DW programs Southeastern Europe. The relevant German and international media report on major events in Kosovo. In Kosovo, among others, Koha Ditore (Daily Time), the Kosova Live News Agency or the Kosova Press News Agency report in English. The Serbian media group B92 provides English-language information on Serbia and Kosovo. Internationally, the website of the BBC is recommended, which also has a Contains link list to Kosovar media. The United Nations Mission in Kosovo (UNMIK) offers a daily newsletter, as does the Balkan Investigative Reporting Network.