According to AllCityCodes.com, the Democratic People’s Republic of Laos was proclaimed in 1975. According to the 1991 Constitution, the presidential power is strong. The President is elected by the National Assembly. The Communist Laotian Revolutionary People’s Party is the only allowed party.

Since 1975, Laos has been closely allied with Vietnam. At the end of the 1980s economic liberalization began in the country and foreign policy normalized relations with China. Relations with Thailand also improved during the 1990s. Laos joined the ASEAN 1997 regional cooperation organization. Also see AbbreviationFinder for abbreviation of LA and its meanings of Laos.

At its inception, Laos inherited a French-inspired legislation, combined with local customary law on, among other things. the area of family law and land law. During the socialist period after 1975, the legal system came under Eastern European influence, and the former law ceased to apply. In 1986, work began on gradually creating a modern legal system adapted to the needs of the market economy. The death penalty remains in the legislation but is de facto abolished in 1989.

Citizens’ inability to influence politics and government is the country’s most significant human rights problem. In communist Laos, the Laotian Revolutionary People’s Party is the only allowed party. The party controls all parts of the government, as well as the country’s security forces, whose resources are extensive and used to stave off the political opposition linked to a large exile population. It is also used to keep an occasional armed resistance in check.

Freedom of meeting is limited. It is not allowed to demonstrate. Protest marches and other events that, according to the government, can cause social instability are prohibited and the length of the sentence for those convicted of such a crime can be up to five years.

It is illegal for workers to join unions other than government-controlled. Strict restrictions on labor law also prohibit strikes. Lao authorities have on several occasions turned down worker protests by force.

As in most authoritarian states, the government controls all national media, which includes newspapers, radio, television and the internet. However, there are no restrictions on foreign TV channels. Press freedom and journalistic freedom are given a bottom rating by Reporters Without Borders Review from 2015. The country is ranked 171 out of 180 countries on the press freedom list and is thus one of the worst places in the world when it comes to the right of citizens to free media and free information. 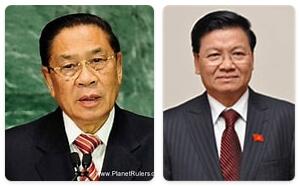 The political dominance of the Laotian People’s Revolutionary Party (Phak Pasason Pativat Lao), in power since 1975, remained in the early 21st century. still undisputed, despite the emergence of violent forms of protest and the presence of a growing social malaise, determined by the persistence of conditions of extreme poverty in many areas of the country.

In the course of 2000 and 2001 numerous terrorist attacks occurred throughout the Laos Although coinvolgessero only a small elite, the demonstrations against the government caused a further narrowing of civil liberties and the loss of that cautious opening also emerged during the nineties of the 201st century, especially in the economic sector, which had seen the increase in commercial relations with neighboring countries and the abandonment of a rigid planned economy. The seventh party congress, held in March 2001, reaffirmed the firm opposition to individualism, liberalism and multi-partyism, giving a clear signal of a return to rigidly ideological positions. The privatization process came to a halt, and state control over all sectors of public life became more pronounced. Religious associations, which again saw their action limited and were in many cases forcibly dissolved at the expense.

The legislative elections, held in February 2002 on the basis of a list of candidates presented by the ruling party and without any possibility of representation for the opposition forces, confirmed the most conservative wing and hostile to reforms in power, advocating a rigid policy repressive. In the following years, controls on the media increased, and the internal climate continued to remain tense due to the occurrence, still in 2003, of new attacks, now attributed to the royalist forces, now to dissatisfied sectors of the armed forces. Although the government tended to minimize its extent, the climate of instability and violence compromised the tourism sector, which had also manifested since 2000a certain recovery, and helped to ward off foreign investors, especially Western ones, against whom controls and restrictions had increased. In March 2006 S. Khamtay, head of state since 1998, decided to leave the leadership of the party he had held since 1992 and, after the elections of May 2006, won in the absence of competitors from the ruling party, in June Ch. Saygnasone was appointed new president.

In foreign policy, the government tried to increase the role of Laos in the regional context, making agreements with neighboring states, in an attempt to relaunch the process of economic and social development, heavily penalized at the end of the 1990s by the collapse of the Asian markets. In particular, relations with China grew, which became the country’s main commercial and financial partner: Beijing committed substantial capital especially for the construction of infrastructures. Commercial relations were also increased with Vietnam and Thailand, with which, to facilitate exports, bilateral agreements for the free transit of goods were signed and the construction of new communication routes was planned.

Furthermore, in December 2004, Laos and Thailand made agreements to complete the demarcation of their respective borders. In this period there was also an improvement in relations with the United States, and joint operations to trace the US veterans of the Vietnam war continued. In 2004 Washington readmitted the Laos among the countries with which the United States had regular commercial relations (the exclusion dates back to 1975), and in 2005 the bilateral trade agreement entered into force, signed in 2003.