Take the train to Tibet

Traveling to Tibet is surely a dream for many. Tibet, with the capital Lhasa, perched high in the mountains of the Himalayas, was for centuries inaccessible to most people and was associated with religious mysticism and inaccessible mountain regions. In the past, commercial caravans and travelers traveled to Tibet in great distress, but since July 2006, it is now possible to take the train from Beijing. In addition to the train journey itself, which offers fantastic views, we also get to see the huge Potala Palace, the Jokhang Temple, the fort in Gyantse, the Tashilun Monastery in Shigatse and the sacred lake Yamdrok Yamtso. In addition to Tibet, we will also visit the famous Kumbum Monastery outside Xining, the fantastic Terracotta Army in Xi’an and some of Beijing’s many attractions, including the Forbidden City, Tiananmen Square, the Ming Tombs and the Great Wall of China. 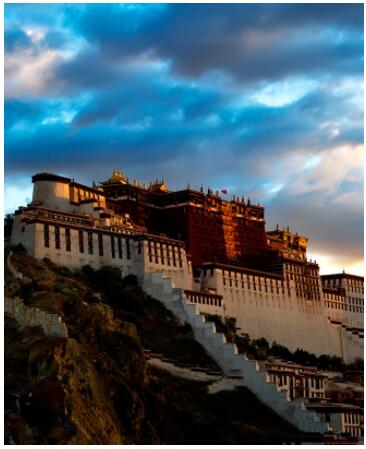 Day 1: Travel to China
Departure from Scandinavia to China. Connection options are available from several Scandinavian locations. Night flight. Meals are served on board.

Day 2: Beijing – Xi’an
Arrival in Beijing in the morning. We switch to domestic flights and continue on to Xi’an. Arrival in the afternoon to this old venerable city where we are met by our Swedish-speaking tour guide. Transfer to the hotel and then it’s time for a moment of rest or exploration of the surroundings. In the evening welcome dinner. Overnight in Xi’an. (Dinner)

Day 3: Xi’an
Already in the morning we head to one of the biggest sights, the Terracotta Army! We spend the morning in the company of 8,000 soldiers with chariots, horses and weapons. One easily falls in amazement at this 2,000-year-old testimony of how an emperor after his death wanted to be protected by his army! We gain additional knowledge about the Chinese dynasties and their history at Shaanxi Provincial Museum, one of the best in China. In the evening we gather to enjoy a banquet dominated by Xi’an’s specialty, jiaozi, extremely tasty little dumplings with different fillings. In connection with the banquet, we get to enjoy a song and dance performance dating from the Tang Dynasty. Overnight in Xi’an (Breakfast, lunch and dinner)

Day 4: Xi’an – Xining
What many people do not know is that there is another terracotta army in Xi’an, Han Yang Lin. It was discovered quite recently, and here we see in an educationally excellent way all the small, only half a meter high, clay soldiers guarding another emperor’s grave. After this visit, we will head to the airport for domestic flights to Xining, the provincial capital of Qinghai Province, where we will later board the train that will then take us on to Tibet. Overnight in Xining. (Breakfast)

Day 5: Xining – Lhasa (by train)
The province of Qinghai borders today’s Tibet but has for long periods been part of the Tibetan cultural sphere and many Tibetans still live here today. We get a taste of Tibet when we visit the famous monastery Kumbum. Hundreds of monks live here and in addition to monastic life, we also see samples of Tibetan-Buddhist art in the form of thangkas, paintings on silk fabrics, and butter sculptures. Later in the day, it’s time for us to board the train to Tibet and the capital Lhasa. The railway was inaugurated in July 2006 and has already become extremely popular. The highest point is over 5,000 meters, and for safety, oxygen is available in the compartments. Overnight on board.

Day 6: On board the train – Lhasa
During the day we can admire the incomparable landscape that passes the revue. In the crystal clear air we see snow-capped mountain peaks and beautiful valleys. Late in the evening we arrive in Lhasa and stay at the hotel. Overnight in Lhasa.

Day 7: Lhasa The
day begins with a visit to the Jokhang Temple, Lhasa’s oldest building and the most sacred shrine of Tibetan Buddhism. We follow, just like the pilgrims, the sacred pilgrimage route, the Barkhor Koran, which winds its way around the temple. In the afternoon we head to the famous Serak Monastery, located just outside Lhasa. Sera’s monks gather every afternoon to argue about Buddhist theology, an important part of their training and education, something that often gets loud as each argument is emphasized by clapping hard! Overnight in Lhasa. (Breakfast and lunch)

Day 8: Lhasa – Gyantse
In the morning we travel by bus along the Yarlung Zangbo River, or Brahmaputra, and enjoy the spectacular scenery. We travel on narrow serpentine roads up to Kamba-Lapasset, located at an altitude of 4,794 meters, above Lake Yamdrok Yamtso, which is located at an altitude of 4,400 meters and which is surrounded by high, snow-capped peaks. Jakas and other cattle graze on the lush alpine meadows and the sparkling snow, the clear blue sky and the green grass together create a fantastic panorama! Via the Karo Lapass, at 5,045 meters, we reach Gyantse with its golden temple, Palkhor, and Kumbumstupan, Tibet’s largest building and one of the foremost examples of Tibetan chörten, stupor. Gyantse was formerly an important junction on the caravan road to India and here caravans traveled with traders, British spies and soldiers back and forth on the way to Lhasa.

Day 9: Gyantse – Shigatse
After breakfast we explore the Dzong Castle, located on a cliff in the middle of the small town. In 1903, 3,000 British soldiers from colonial India attacked the castle with machine guns and cannons, led by Sir Francis Younghusband. The 1,000 Tibetan defenders fought back with ancient flintlock rifles and lances, but were completely defeated in what is historically called the world’s highest blow. Much has changed in Gyantse and walking around the old town is like moving 100 years back in time. Then we take the bus to Tibet’s second largest city, Shigatse, where we visit the Tashilhun Monastery, seat of the Panchen Lama, the second most important incarnation in the Tibetan Buddhist hierarchy. Overnight in Shigatse (Breakfast, lunch and dinner)

Day 10: Shigatse – Lhasa
In the morning we travel by bus along the Northern Friendship Highway for about 250 km, back to Lhasa. On the way we visit a Tibetan village and get to see the everyday life of the locals. After arriving back in Lhasa, it will be time to wander around on your own. Overnight in Lhasa. (Breakfast and lunch)

Day 11: Lhasa
In the morning we will now finally come to the Potala Palace, one of the world’s most famous and distinctive buildings. The building, once home to the Dalai Lama, is considered the prime example of Tibetan architecture and its whitewashed walls, and the gilded, sun-shiny copper roof is visible for miles around. The emperors of Beijing had their summer palace, and in the same way the Dalai Lama had a summer place, Norbulinka. In the afternoon we will walk around this beautiful place where the current Dalai Lama stayed until 1959. Overnight in Lhasa. (Breakfast and lunch)

Day 12: Lhasa – Beijing
After breakfast we go to the airport and take the flight to Beijing where after arrival we have the rest of the day free for our own program. Overnight in Beijing. (Breakfast)

Day 13: Beijing
Today it will be a full day trip in the surroundings of Beijing. In the morning we take the bus and travel north. We stop at a cloisonne factory, where we get the opportunity to follow the production of these typical Beijing specialties. Cloisonné are objects of copper covered with layers of enamel in different colors and shapes. In Swedish it is called cell enamel. The journey continues and soon we are at the Holy Road. This was the road along which the bodies of the Ming emperors were carried to be buried in the magnificent Ming tombs. We walk in a calm and peaceful atmosphere on the road lined with lots of large marble statues of elephants, camels, horses, military and civil servants. Gradually we arrive at one of the thirteen Ming tombs in the area. We will visit the tomb of Emperor Wanli, the only one who has been excavated. We get to step down into the 27 meter deep grave. The afternoon is devoted entirely to one of the highlights of the trip: the Great Wall of China! The feeling of standing on this venerable and very impressive wall is indescribable! For a long time, one can think of all the millions of workers who for a couple of hundred years struggled to build this miracle. We will return to Beijing early in the evening. Overnight in Beijing. (Breakfast and lunch)

Day 14: Beijing
We begin the day with a tour of the political heart of modern China, Tian’an Men, or Tiananmen Square. Surrounded by various government buildings and monuments, this is a place where one can easily feel the wings of modern Chinese history. From the square, we walk through the Tian’anmen Gate under Mao’s large portrait into the Forbidden City, the world’s largest palace complex, located right in the heart of Beijing. Here the emperors resided during the Ming and Qing dynasties with their eunuchs and concubines from 1421 to 1911. We spend a couple of hours in this strange environment. In the evening, we gather for a joint farewell dinner where the Peking Duck is one of the items on the menu. Overnight in Beijing. (Breakfast, lunch and dinner)

Day 15: Return from Beijing
Breakfast at the hotel. Transfer to the airport and flight to Scandinavia with arrival the same day. (Breakfast) 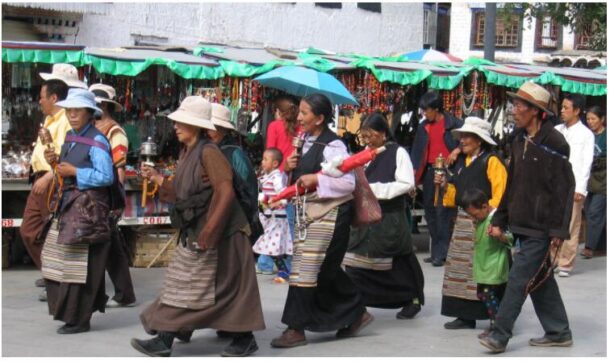