Trinidad and Tobago Government and Politics

According to AllCityCodes.com, Trinidad and Tobago became a republic in 1976, replacing the former governor with a president who is elected for a five-year term by an Electoral College from Trinidad and Tobago’s two-chamber parliament. This consists of a Senate with 31 members and a House of Representatives with 36 members. The Senate is appointed by the President, and the House of Representatives is elected by universal suffrage for a five-year term. The voting age is 18 years. Tobago has since 1980 shown some self-government and its own minimal parliament.

Trinidad and Tobago’s large oil revenues, together with relatively stable policies, have given the country a significant role in Caribbean cooperation.

The legal system in Trinidad and Tobago is based on English law in combination with domestic legislation and local precedents. The main courts are the High Court and the Court of Appeal, with some options to appeal to the Privy Council in London. The death penalty can be punished for some serious crimes.

Of the present-day Caribbean islands, Trinidad and Tobago were the first to be settled – due to their proximity to the South American mainland. Around 7000 BC The first inhabitants came. Around 250 BC The saladoids came here. They were ousted by the Arawak peoples in the 7th to 9th centuries. These in turn were driven out by the Caribs around 1200. The development was similar to that on the other islands of the Lesser Antilles.

Columbus and the first settlers

A fort was built on Trinidad in the 1530s, but the Indians resisted the intruders. It was not until 1592 that the Spaniards settled permanently in Trinidad. The city of St. Joseph was founded that year. Plantations were created mainly for cocoa and tobacco. Slaves were brought in from Africa for farming.

In 1699 there was an uprising of the Indians in which many people died. From 1783 the settlement of French citizens was allowed. The population doubled and there was finally an economic upswing. British negotiated from Trinidad. The island remained in Spanish hands until 1797. That year, however, under the leadership of Ralph Abercromby, Great Britain conquered the island, which was surrendered without much resistance. Trinidad was now British, but still had a French majority population.

Tobago, however, changed hands several times until 1797. Spaniards, French, British, Dutch and Kurlanders (residents of a duchy in what is now Latvia) took possession of the island, which was soon called Tobago. The name is derived from the Spanish word for tobacco. It was grown here, as was cotton. In 1797 Tobago also became British.

In 1797 Trinidad and Tobago became part of the British colonial empire. Little by little, more British settlers came. Sugar plantations were established and more slaves were brought into the country. In 1834 slavery was abolished. Now there was a shortage of workers and so between 1845 and 1917 more Indians were brought into the country as contract workers. Many stayed on the island even after their contract expired. Sugar and cocoa became important sources of income. Oil was discovered in 1857, which made the economy flourish, especially from 1910 onwards.

From independence until today

In 1962, Trinidad and Tobago gained independence after the West Indian Federation had collapsed shortly before. In 1958, it was an amalgamation of several previously British states, but it failed. Trinidad and Tobago were initially a kingdom with the British Queen as monarch. In 1976 the country became a republic. 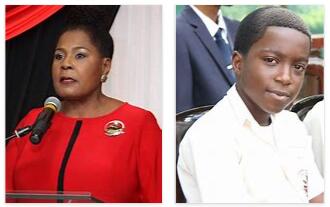